WHY IS THE WOMAN IN THE PHOTO HOLDING HER ABDOMEN?

A TALE OF TRAUMA AND THE PSOAS 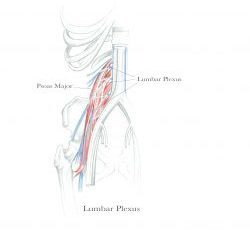 A friend living in the southern US opened her front door, and literally froze.  There was a dangerous snake on her porch.  Doing its best to protect her, her nervous system froze her body.

Dr. Stephen Porges’ Polyvagal Theory explains the way evolution dictates how the nervous system and body respond to danger signals in the environment.  His theory has transformed the way we view trauma and chronic illness and has raised the status and relevance of the vagus nerve to be a popular topic in mainstream magazines.  Dr. Porges discovered that the vagus nerve, which innervates most of our organs, has different branches, and that the autonomic nervous system reacts to danger in a hierarchy of three possible responses.  The first line of defence in the face of a perceived threat is activation of the most recently evolved social engagement system.  We try to negotiate safety through our words, tone of voice, eye and facial expression, and gesture.  The face, eyes, inner ear and mouth are innervated by cranial nerves associated with the ventral vagus nerve.  The psoas is involved in this response by “faking it”.  If I sense that the person in front of me is unsafe, I can appear outwardly calm but my psoas muscles are gearing up for the next response, fight or flight.

Unfortunately, negotiating safety doesn’t work with a snake!  So my friend’s nervous system inhibited her vagal calming and social engagement system and activated the second line of defence, the fight or flight response.  Safety through mobilization, running away or fighting, is enabled by activating the main muscles associated with this strategy, the psoas muscles.

You can’t really fight with a snake, and movement often triggers a snakebite, so my friend’s nervous system inhibited the fight or flight response and activated the most primitive response to danger, system shutdown or freezing.  The dorsal part of her vagus nerve activated neural circuits that would raise her pain threshold, decrease metabolism, slow breathing and heart rate and even cause her to dissociate, all of which would increase her chances of survival in a life-threatening situation.

Luckily, the snake slithered away.  The instinctual response of my friends nervous system may have protected her from a fatal snakebite.

The response of the psoas to trauma has effects on physical, mental and emotional levels:

Accessing the psoas in a trauma sensitive way can build resources at the same time traumatic memories are released from the tissues.  Stay tuned for next month’s blog on how the psoas protocol can help people to heal from trauma.